One Family’s Story: One Year After AAC + Symbol-It 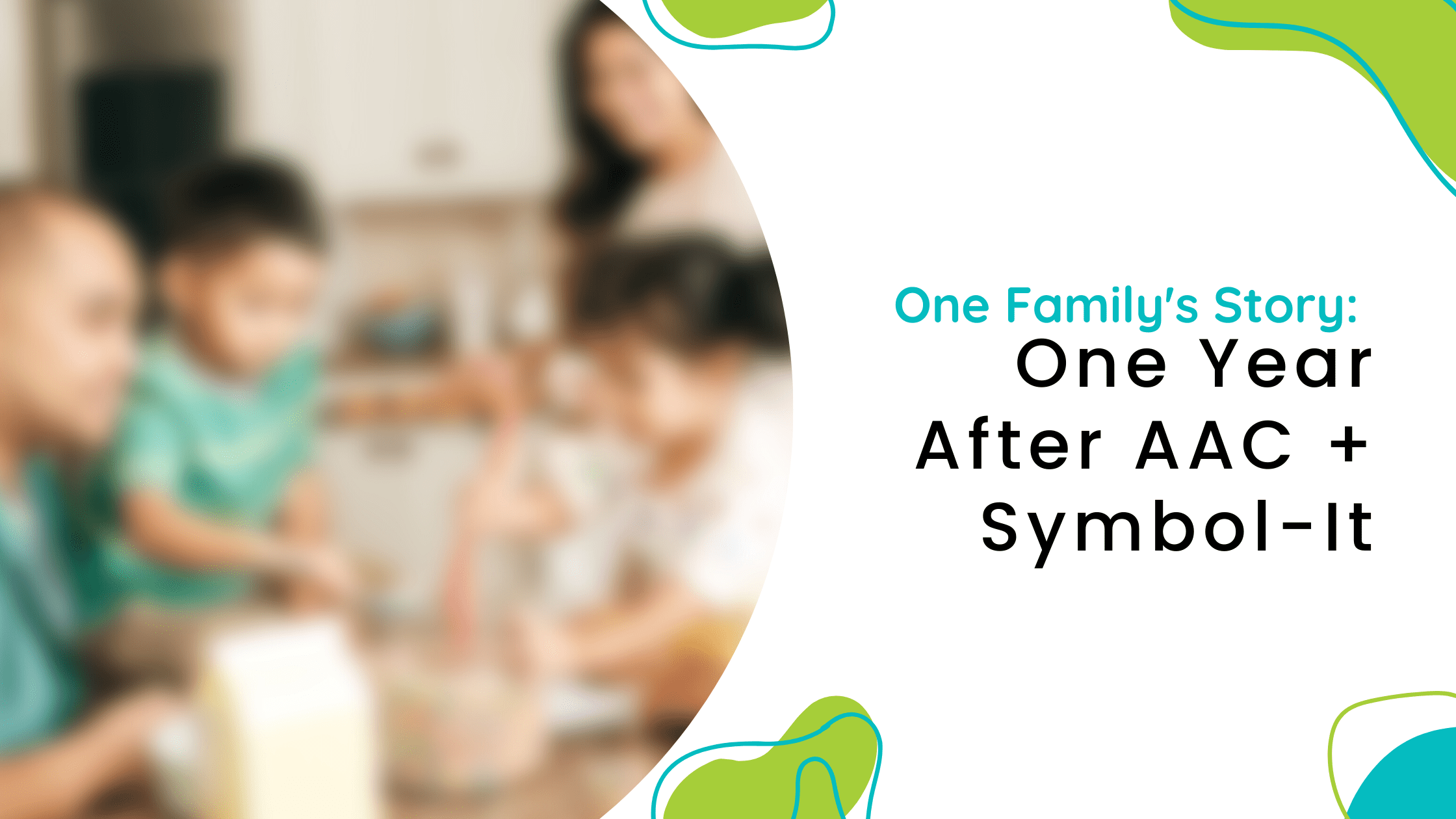 There are many avenues to use Symbol-It, whether in the classroom or in therapy or in the home. Today we wanted to share the results of a family that has used Symbol-It in conjunction with a speech-generating device for over a year.

When Carmen and Victor first took the dive into AAC and introduced it to their nonverbal child, Alex, it was with minimal direct experience.

“I would say that I had limited experience with AAC,” Carmen said, “but I put a lot of time and effort into researching it.”

The journey to obtaining a speech-generating device was a long one as with most families, but both parents agreed it was the tool which offered the greatest benefit for Alex.

“AAC represented opening a door for Alex that had been closed for a long time,” Carmen said when asked what the SGD meant for their family. “His device meant giving him a voice.”

Consistently using the SGD became a challenge, however, as it presented a big change from using static communication boards. Neither parent reported significant progress with those conventional tools.

“I have to say at first it seemed like Alex almost resented his device,” said Victor. “He did take to it better than with PECS, but it was still a lot of work.”

Both parents cited a short attention span, a lack of personal confidence, and a reluctance to be different from his siblings as reasons for Alex’s hesitancy in utilizing his SGD.

“Sometimes it seems like Alex’s preferred language is telepathy,” Victor quipped. “If he doesn’t want to use his device, then he just won’t do it.”

After a year of incorporating Symbol-It alongside use of the speech-generating device, the family was surprised at what happened.

“The most immediate result,” Carmen said of using Symbol-It while Alex used his SGD, “was that he seemed more interested in symbols in general. He was very uninterested at first, like he doubted symbols were a real way to communicate, but when I started using Symbol-It it was like he realized they could be.”

When Alex first got his SGD, it was a brand new opportunity, but combining it with Symbol-It opened up a whole new world. The family reported that AAC had begun as something utilized at home or at speech therapy, but with Symbol-It at hand, AAC became a normal way of life. In the long-term for Alex, his parents said Symbol-It helped give context to using a symbol system.

“Using AAC on the fly is really hard to do,” said Carmen. “But now getting other people to use symbols is not hard. When we go places with Symbol-It, we are able to communicate with strangers.”

By having family, friends, and strangers alike use Symbol-It, Alex has been more motivated to use his SGD.
“A couple months ago Alex had his first back-and-forth conversation with his grandma,” said Victor. “She said something, he replied back, then she said something else, and he replied to that. It was a huge jump for him.”

Carmen related her frustration with trying to communicate with Alex using his own device. “Due to his short attention span, if I take the time to communicate to him with symbols on his device, then we’ve lost the moment because he doesn’t care anymore,” she said, adding, “Symbol-It has helped us not lose the moments of opportunity for meaningful communication in symbols.”

In the end, this family has learned how Symbol-It provides the ability to fully immerse language learners in their preferred language in every context and in every interaction. We already know that total immersion is the optimal form of developing spoken language, sign language, and general literacy. Symbol-It brings that same power of total immersion to AAC.

We craft software to change the lives of people who, without SymbolSpeak, would never be able to find their voice.

Symbol Description:
Minspeak symbols are used within PRC vocabulary systems, including Unity, LAMP Words for Life, UNIDAD, and CoreScanner. With a small number of icons, a person using a Minspeak system can independently communicate a large vocabulary without having to spell or to learn and navigate through a large set of pictures. Minspeak symbols are available on PRC communication devices and apps including Accent 800/ 1000/ 1400, PRiO, Via Pro, and LAMP Words for Life iOS app. See www.prc-saltillo.com for more information.

Legal info:
Minspeak symbols and the Unity and UNIDAD language systems are a registered trademark of Semantic Compaction Systems and are used exclusively in PRC-Saltillo speech generating devices and apps. Apps and devices that use Minspeak symbols include Accent 800/ 1000/ 1400, PRiO, Via Pro, and LAMP Words for Life iOS app – these are all registered trademarks of PRC-Saltillo. See www.prc-saltillo.com for more information.

Symbol Description:
Smarty Symbols™ is a robust library of graphic representations of  language used for visual support, communication, and language support.  Its Symbol of Choice library provides an opportunity for additional customization of representations for a wide variety of children and adults. Smarty Symbol’s contemporary graphic style and up-to-date vocabulary provide maximum opportunity for efficient and flexible communication. Smarty Symbols is used in several apps including Custom Boards, Speak for Yourself, Speak with Me, Expressive, etc

Get this resource sent right to your inbox

(We hate spam too, so you only get the good stuff and we keep your email private).