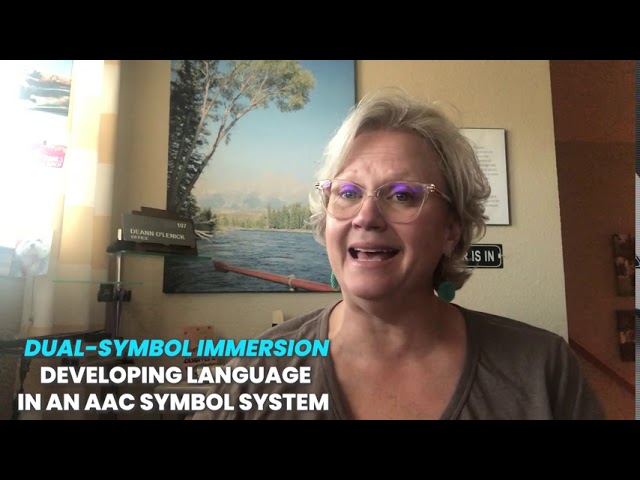 Welcome back! We’re talking today about Dual-Symbol Immersion — the immersion in two symbol systems simultaneously, the ability to see and hear language throughout the day in all contexts. You and I know and have heard for years that to become proficient in language one must be immersed. That applies if it’s our first language. It also applies if we’re learning a second language, and Dual-Symbol Immersion Theory says it applies when it’s one language but a second symbol system.

But that still still requires development. That development of expressive language moves from speaking in single words or single symbols to speaking in two-word combinations — speech and picture symbols or just picture symbols — on up to speaking complex sentences. We know that for speech, that first step in the expressive speech is baffling. All of those developmental stages still need to happen when that language is through an augmentative communication system. Dual-Symbol Immersion Theory which is developed by Hear MY Voice – Language Through AAC through myself, Deann O’Lenick, and Courtney Treviño (née Garcia), we’ve developed the theory to be able to realign verbal expressive language and the expressive language through an alternative symbol system. The essential element of it is immersion that to move through those developmental stages we need to hear and see that language be made visible. We need to hear the little conversations as well as the big instructions. Through that the symbol speaker will have the opportunity to develop their own skills through the developmental sequence.

Dual-Symbol Immersion aligns us with language and language development. It reminds us that we need to speak in the language and the modality or the symbol system being developed throughout the day, throughout the environment, throughout context. Symbol-it was designed in order to make that more impossible. That’s a wonderful phrase! Make that more possible — make that easier for interested parties and family members who don’t know the speech-generating device or the augmentative communication system and for incidental communication partners to be able to speak to and speak into the development of our symbol speakers. So, with that, go ahead and Symbol-It!

We craft software to change the lives of people who, without SymbolSpeak, would never be able to find their voice.

Symbol Description:
Minspeak symbols are used within PRC vocabulary systems, including Unity, LAMP Words for Life, UNIDAD, and CoreScanner. With a small number of icons, a person using a Minspeak system can independently communicate a large vocabulary without having to spell or to learn and navigate through a large set of pictures. Minspeak symbols are available on PRC communication devices and apps including Accent 800/ 1000/ 1400, PRiO, Via Pro, and LAMP Words for Life iOS app. See www.prc-saltillo.com for more information.

Legal info:
Minspeak symbols and the Unity and UNIDAD language systems are a registered trademark of Semantic Compaction Systems and are used exclusively in PRC-Saltillo speech generating devices and apps. Apps and devices that use Minspeak symbols include Accent 800/ 1000/ 1400, PRiO, Via Pro, and LAMP Words for Life iOS app – these are all registered trademarks of PRC-Saltillo. See www.prc-saltillo.com for more information.

Symbol Description:
Smarty Symbols™ is a robust library of graphic representations of  language used for visual support, communication, and language support.  Its Symbol of Choice library provides an opportunity for additional customization of representations for a wide variety of children and adults. Smarty Symbol’s contemporary graphic style and up-to-date vocabulary provide maximum opportunity for efficient and flexible communication. Smarty Symbols is used in several apps including Custom Boards, Speak for Yourself, Speak with Me, Expressive, etc

Get this resource sent right to your inbox

(We hate spam too, so you only get the good stuff and we keep your email private).